How Net Metering Works in Pakistan?

One of the most remarkable inventions in the history of mankind is the invention of solar panel systems that allowed us to harness the Sun’s immense power and use it to generate electricity. We all know how a solar panel system works by using solar radiation to generate electricity and supplying it to the house for usage. Net Metering is the icing on the cake for anyone who has a solar panel system. Net metering is one of the best phenomenon that was established to supplement solar users with more benefits. Net Metering laws are different in every country and the mechanism work in varied ways providing advantages to the consumers in different ways. NEPRA, in September 2015, issued its net-metering rules that allow the DISCOs in Pakistan to buy surplus units of electricity generated by the customers, and net them off against the units consumed from the grid.

What Is Net Metering in Pakistan?

Net metering in Pakistan is an amazing mechanism that takes account of all the units supplied to the grid and taken from the grid when needed during the night time or even at the day time when the requirement surpasses the yield of the solar system. Net meter as often people confuse it, is not the supplier of electricity, it is just a measuring device that measures the units of electricity supplied to and from the grid station.

Net Metering system has a few conditions that need to be fulfilled in order for the system to be installed. These requisites are as following:

The first and foremost requirement for a net metering system to be installed is the connection to the grid. This is the reason why the system only works with a grid-tie or a hybrid system and is not compatible with an off-grid system.

The sunction load should be less than the system capacity. Net metering is available for a solar panel system with minimum capacity of 3 KW. For a 3KW system, the sunction load must not be more than 2 KW. Before you can understand the flowchart of how net metering works, there are a few things and terminologies that you need to have know-how about. These are explained below:

These are the hours of the day when the electricity unit costs more than the rest of the day. They are usually from 5pm – 10pm depending upon the season. They change a little bit quarterly a year.

These are the units that are imported from the grid station to fulfill the electricity requirement of the house. They are usually less to zero during off-peak hours as the electricity is provided by the solar panel systems.

These are the units that are exported to the grid stations by the solar system owner. These are zero during the peak hours and the night time as there is no input from solar panels during that time. 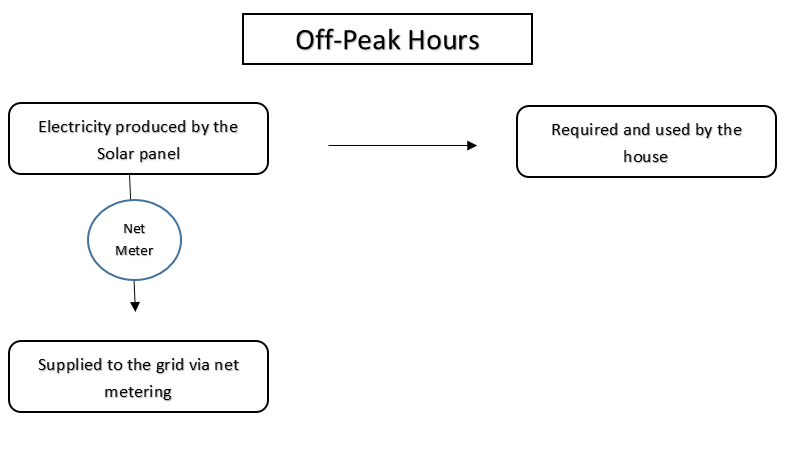 Monthly Status of import and export of the electricity

If the unit price is considered Rs. 14 per unit. The monthly bill for off-peak hours will be:

The negative charge indicates that the customer has supplied units worth Rs. 2240 to the grid utility. 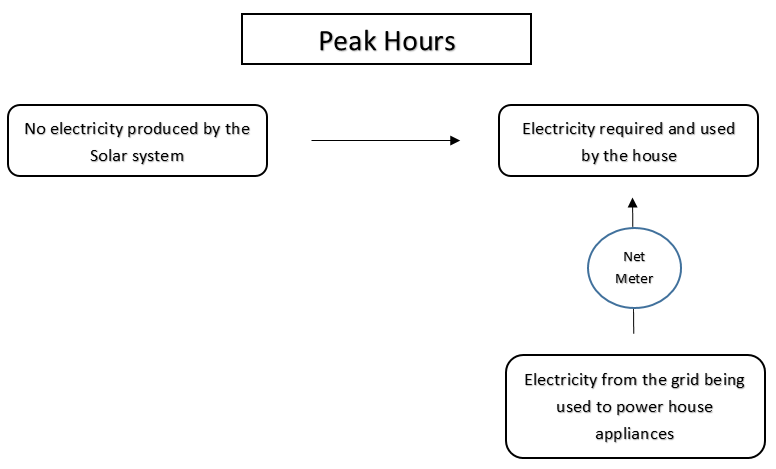 Monthly Status of import and export of the electricity

If the unit price is considered Rs. 20 per unit. The monthly bill for peak hours will be:

Monthly net bill will be

The Negative charge shows that the customer has a charge of Rs. 540 towards the electric company which shall be adjusted in the next bill.

NOTE: All the values mentioned in the tables are supposed values to make understanding better.

The year is divided into four quarters based on the peak hours’ duration which changes every three months. If at the end of the quarter you have negative bill, you can avail the following two options:

People often use the former option as the latter one requires a lengthy procedure and may become a hassle.

Premier Energy provides comprehensive assistance from arranging net metering application form till successful commissioning through net metering initiation. We are approved by the Alternative Energy Development Board (AEDB) for net metering installations across the country. Many cases have been listed and accomplished for net metering systems and the total count is one the increase. Premier Energy has a 14% share in total KWs net-metered Pakistan which tells volumes. So far we have effectively installed Net Metered Power Plants in Pakistan in more than 33 cities. Generate electricity, save excessive, and earn by export it back through Premier’s net-metered solar solutions.

Say YES to Solar and NO to Conventional Energy Sources!