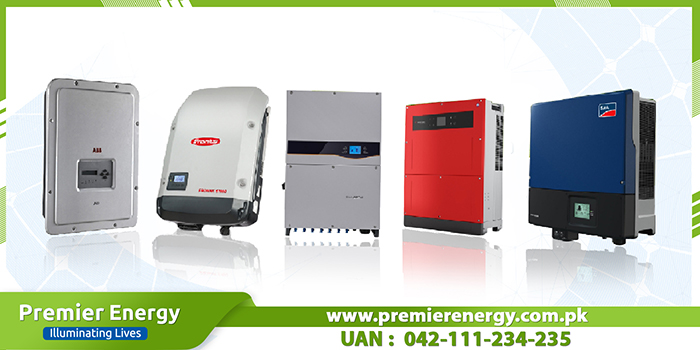 What is A Solar Inverter?

It is a device that converts Direct Current produced by the solar panels into Alternating Current with the adequate voltage so it can be used by the home appliances. The inverter also maintains and manages the core operations of the solar system which includes but are not limited to managing the supply of electricity to and from the inverter and appliances, grid and batteries.

Premier Energy only deals in the best as we aim to provide the best quality both in terms of products and services. For this reason, we have only partnered with the solar inverters’ manufacturers that have been approved globally because of their superior operations, reliability and durability. We deal in the following on-grid solar inverters in Pakistan:

Many factors affect the cost of off-grid solar inverters in Pakistan and are the reason for price fluctuations between models of different companies and the same companies as well. These factors do not include variations that are the consequences of basic economics like fluctuation in currency value, demand-supply ratio, etc. The following become the reason of the difference between the prices of various off-grid solar inverters:

There are many manufacturers producing a lot of good quality inverters but Premier Energy only believes in the best for their customers. We deal in only the following Off-Grid Solar Inverter companies which are considered the best among the best.

The cost of the off-grid solar inverters that we offer are as following:

Infini off-grid inverters are distinguished for their superior operations, efficiency, reliability, and smart management of excess electricity through battery functions. Its success has enabled Infini to become a global company by opening branches in the USA as well as many other countries.

Infini has the following features which make it one of the most favorite inverters especially for various operations:

Axpert is a good company of solar inverters with durable, top-quality inverters available at a reasonable price. Axpert is a top-class company among tier two solar inverter producers who have made its name all over the world when it comes to off-grid inverters.

The distinguishing features of Axpert solar inverters are:

Premier Energy has always maintained a balance between qualities and pricing. We have always made the best quality available at the most reasonable price. We bring to you the solar inverters that have been approved and tested by our solar experts as well as the local clients over time. We are briefing the models of different solar inverters that we offer from various manufacturers along with their features and prices below.

Get a Free Solar System Quote

You can avail free consultation by talking to one of our solar consultants or if you want a free quotation; all you need to do is to call us. We have plans in place to help our clients find the most suitable system for the most workable financial solution for them. Get in touch with us for a detailed discussion about your solar project.