Usage of Best Solar Panels in Pakistan is on the rise as it is the most effective alternative to conventional energy. In the wake of energy predicament, a number of consumers belonging to all sectors have switched to solar panel solutions. These sustainable solar systems ensure energy conservation which make them a smart option for users. Solar solutions are an automatic choice for clean and renewable energy in our country because it is blessed with sunlight throughout the year. The seamless installation of a turnkey solar solution ends power outages and can make high electricity bill to zero. Before explaining solar panels’ types and efficiency, it is pertinent to mention that photovoltaic (PV) solar panels are being discussed. Buy best solar panels in Pakistan from best solar panel company in Pakistan.

Types of Solar Panels in Pakistan

Two most common types are Monocrystalline and Polycrystalline. Their PV solar plates feature crystalline silicon cell technology which differs in both types. These counterparts also have some other distinctive variables which give a better overview and influence users’ choice. It includes aesthetic, volume, construction, cost, space efficiency, performance in certain environments and purity of silicon used in the making. For a better understanding, each of these two types are reviewed in detail below: 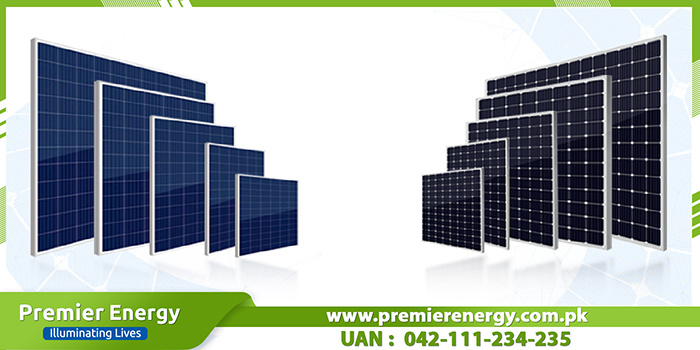 As obvious by its name, the monocrystalline solar panels are made from single-crystal silicon. A method termed ‘Czochralski’ is adopted for the formation of large cylindrical shaped silicon ingots using the drawn technique. These ingots are then sliced from the four sides to make silicon wafers.

The monocrystalline panels can be distinguished easily with their cut-out edges of the ingots. Other prominent visual highlights of these solar panels are even color and uniform look.

Since highest grade silicon is used during the construction of monocrystalline solar panels, they yield highest power outputs. The solar cells composed of single-crystal silicon allow more space to electrons to generate a flow of electricity. On average, this type of solar panels have an efficiency rate of 15-20%.

For solar panel installations, availability of adequate space is highly desirable for both options; on roof or at ground. The monocrystalline solar panels are space efficient and require lesser space as compared to the other counterpart.

These solar panels are given a 25 year warranty by the manufacturers which is considered ideal. However, most of the times it lasts much longer beyond the given period.

Monocrystalline solar panels tend to perform better in the low-light conditions or in warm weather as compared to other types.

The multicrystalline solar panels are developed when many fragments of raw silicon is melted and then cooled down. After cooling, it is sliced into square wafers to form the panel.

The polycrystalline solar panels have performance efficiency close to the monocrystalline ones with efficiency rate ranging 14-16% on average. As there are many silicon crystals in each solar cell, electrons can’t move much freely resulting in slightly less efficiency.

The polycrystalline solar panels can be a suitable option if enough space is available as these panels require larger space. If there is any limitation or space constraints, these panels won’t be a viable choice.

As far as longevity is concerned, the polycrystalline solar panels come up with 25 years warranty which is good enough. If maintenance is maintained overtime, more likely this time duration can exceed.

The performance of polycrystalline solar panels suffers in certain climate conditions like snowy weather or low-light situations. As they tend to have lesser heat tolerance, their performance drops as temperature rises to the peak.

Following is a brief head-to-head comparison of these two types of solar panels on some key metrics helping you to make the right choice:

Best Solar Panels in Pakistan – Which one is Perfect for your Home?

Solar panels manufactured by different brands are now available in Pakistan. The selection of monocrystalline or polycrystalline solar panels is preconditioned to the customized needs, cost and space availability you have. The choice of a reputed brand is key in this case which offers supreme quality solar plates. Premier Energy integrates solar panels of top notch international brands and facilitate their clientele with a finest user-experience. Here is a brief introduction of each of these top rated solar panel brands.

JA Manufactures multiple high performance solar modules which are utilized in PV systems for different sectors. Being on top for their durability and reliability, JA Solar Panels in Pakistan are integral part of solar systems or power plants. Get a Quote for JA Solar Panel Price in Pakistan and contribute to a better future.

One of the leading PV manufacturers in the world, Suntech is defined with high quality, reliability and performance efficiency. It has been quite some time since SunTech Solar Panels in Pakistan are being used in the solar solutions. The cost effectiveness of its modules has made it popular in our region.

Quote for updated Solar Solar Panel Price in Pakistan. Premier Energy uses only the best available solar panels in the market. We have partnered with the top brands to provide you the best solar panels in Pakistan without any burden on your pocket. We use highly efficient and reliable solar panels tested for their durability and performance consistency. For any queries about solar solutions, feel free to call us, text us, or reach out to us in any way that is easy for you. Our solar consultants are always available to provide you a consultation about your system.