Karachi, the largest city in Pakistan and the seventh largest city proper in the world is the elite business and industrial center of Pakistan that has been suffering the most because of the increasing energy crises. This has not only affected the economy of Karachi but is also having negative impacts on the economic stability of the whole country. 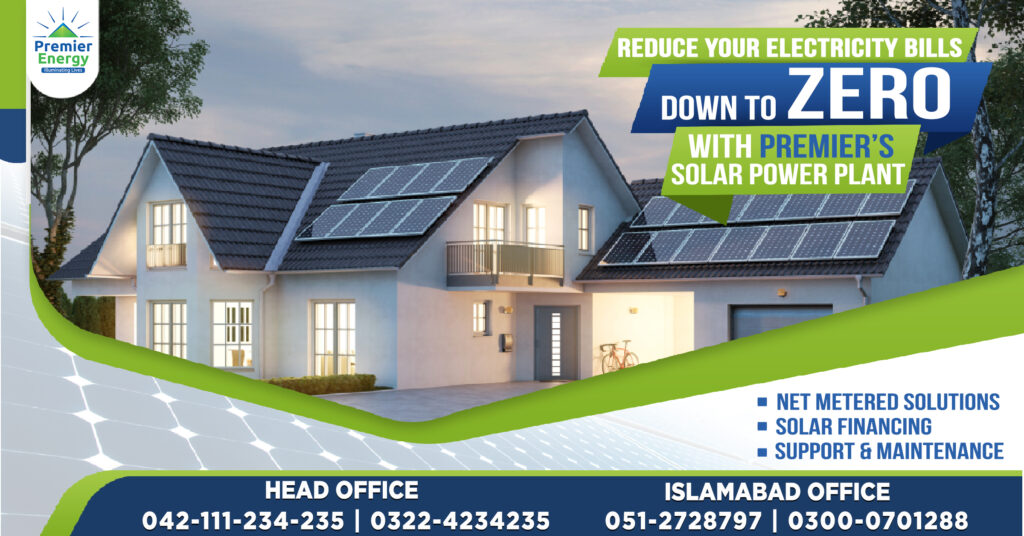 Premier Energy has stepped in to rescue the declining situation of Quaid’s city by helping Karachiites go solar and overcome their energy crises. Premier Energy is the best solar company in Karachi offering affordable turnkey solar solutions which is an investment that will never disappoint the customer. Forget to worry about bills and load shedding and focus on making profits through this ultimate source of renewable energy.

The Most Advanced Solar Company in Karachi

Premier Energy is the most prolific solar service provider that is consistently renewing its services, as indicated by the most recent innovations in the market. Premier Energy has been working with all the Tier 1 brands that deliver the most proficient and reliable items that are the greatest in the market so, our customers receive the best solar panel system in Karachi. This method goes considerably far, as the quality of the product and the innovation being employed is the determining factor for the dependability of the system, and we serve our clients to make their investment in the long term.

The Most Pocket-Friendly Solar Solution in Karachi

Premier Energy has partnered with the top solar manufacturers to bring the best quality at the most modest price, so you get more advantages at less expense. The installation and administration charges are kept minimum, so more people can manage to install solar panels. Our costs make us stand out amongst other solar companies in Karachi.

Net Metering is an arrangement that takes record of all the excess electricity that you contribute to the grid station and provides you with the credits that can be used against the bill you receive. The net metering ability is only available with on-grid solar solutions and hybrid solar solutions. Premier Energy prides itself on the V1 net metering certificate from the Alternative Energy Development Board (AEDB) that is difficult to achieve after the new policies. We give our support in handling all the processes from the accomplishment of application till your meter is installed which is one of the reasons that make us the best solar company in Karachi.

Sectors We Deal In

Premier Energy, unlike other solar companies in Karachi, deals in all areas and has a robust portfolio of successful projects installed in every field. We have completed small domestic projects of capacities as low as 3KW to enormous industrial solar energy plant installations of up to 4MW. The following sectors are the ones we offer our services in:

Solar panels manufactured by different brands are now available in Pakistan. The selection of monocrystalline or polycrystalline solar panels is preconditioned to the customized needs, cost and space availability you have. Premier Energy integrates solar panels of top notch international brands and facilitate their clientele with a finest user-experience. Here is a brief introduction of each of these top rated solar panel brands.

Premier Energy uses the best quality of solar panels available in the market. We provide these at the most pocket-friendly price. The solar plates we have are available in a number of sizes and models with various distinguishing features. Get a quote for Ja Solar, Longi Solar and Canandian Solar. The solar panel companies we deal in are as following:

Premier Energy deals in the world’s best inverters that have with around 10 years of warranty that makes investing with Premier Solar Solutions the right thing to do. We deal in only the top solar inverter companies in the world which are as following:

The solar system rates in Pakistan varies a lot as it depends upon a number of factors which are as following:

The service level agreement we do with our clients is of life-time support because once we have made a client we are always going to be there for them. Our life-time services make us the best among solar companies in Rawalpindi.

Fault apprehension of fuses and breakers that are creating the problem.

Measure charging and discharging state of batteries to improve their life.

Updating the consumer on the state of the system installed.

24/7 on-call maintenance and support services in case of any solar emergency or complaint.

Check- up of Solar Plates

Check-up of solar plates and the structure they are placed on to make certain everything is in position.

Maximizing the yield of the overall solar-powered system to produce cost-efficiency.

Making the most viable monetary plans for the connection of the system.

Why Premier Energy for Solar Solution in Karachi?

Premier Energy is the most reliable solar company in providing optimum solar solutions to its clients. Investing in solar with Premier Energy will never dissatisfy. We strive to give our clientele the best experience of going solar because we believe in customer satisfaction.

We are a certified service authorized by the Alternative Energy Development Board (AEDB) to provide services to customers all across Pakistan. We are also ISO 9001 and ISO 14001 certified that explains our credibility even more. We also have the SBP’s revised solar financing program authority of category 1 and V1 net metering certificate from AEDB that is the proof of our commitment.

We control all the processes and procedures from system selection to the establishment of a solar system, so see things happen in the most skilled manner. We work promptly and you don’t have to wait to reap the benefits of your investment.

We have magnified our services to more than 33 cities of which Karachi is one, which is the proof of our satisfied clientele. Our clientele belonging to the industrial, commercial, and agricultural sectors include many prominent brands and industrial giants. Some of our loyal clients are the following renowned Industries:

Premier Energy is the provider of the most affordable and cost-effective solar solutions, working with the aim to make solar energy accessible to the maximum number of people.

Have you been thinking to switch to solar energy for a long time now? You are not sure about the system and specifications you will need? Contact us and we will help you make an informed decision. We are available through email, call, or you can also contact us via our website and social media.