Solar energy is the most cost effective and practical source of renewable energy which most people can afford. The more people go solar, the more benefits it will have for all the persons in the world. Solar Energy does not only help us get electricity for ourselves but it also helps us to contribute to a cleaner environment and more electricity for other users as well. The solar solutions which are available to us today have three types among which we have On-grid Solar Solutions.

What is On-grid Solar Solution? 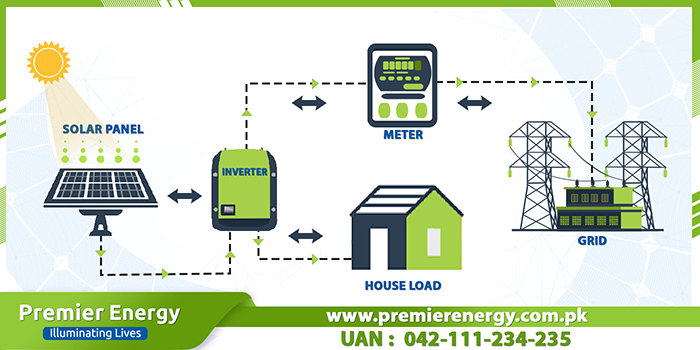 The Components of an On-Grid Solar System

There are some grid-tie systems which allow batteries to be used with them.

How does a Grid-tie Solar System Work?

In an on-grid system, the PV cells in the solar panels generate electricity when the sunlight hits them. This generated electricity is then transferred to the inverter via a network of wires. The inverter performs the primary function of converting the energy created by the solar panels in the form of DC to AC with 240 voltage which can be used by the appliances. Once the house is being supplied with constant electricity, the next step that the inverter performs is to send the excess electricity being produced by the PV panels to the electricity grid. Grid-tie solar panel systems uses the utility grid as a virtual battery and stores the excess current in the utility grid. The surplus electricity passes through a net meter while it is stored into the national grid system. The net meter measures the amount of electricity being supplied to the grid as well as the energy that is actually being used.

The on-grid solar solutions have the widest applications and are the most used solar solutions. They are applicable in almost all sectors except agriculture. These systems are used by most consumers for two main reasons which are:

The detailed utilization of the grid-tie system is as follows.

The residential grid-tie solar solutions are easily available and the most widely used on-grid solar system. Residential customers usually choose the system because of its affordability. Domestic consumers are using a single-phase meter which needs to be replaced with a three-phase meter to apply the net metering system, however, because of its immense advantages, these systems are the number one choice of domestic clients.

The industrial sector is the chief user of the grid-tie solar solutions as they have a three-phase system and plenty of space to use for installing solar panels. Furthermore, the addition of batteries in the other two systems makes it an on-grid system the most viable option for industrial users.

The benefits of the Grid Tie / ON-Grid Solar System are:

They work in connection with the grid system, which allows the house to use electricity from the grid when the system is not working as efficiently because of the weather conditions such as rain. They are very reliable as they allow energy independence however, they may not be the best choice to deal with grid failures. As long as there is no utility failure, you will always have access to electricity no matter the time of the day or the climate.

The cost of this system is less than other systems which makes it more affordable. The reason is because the system does not require a lot of equipment. Very basic equipment is required and the most expensive component of a solar panel system, the batteries, are not required at all because the same function is served by the grid.

This is probably the biggest benefit of the grid-tie solar system. The net metering system allows a person to use the excess electricity produced by the solar panels to gain credits in the form of electricity units which may be used during night or when the system is not working efficiently because of the climatic conditions. It can also be used to earn money by selling the excess electricity to the grid.

Load off the Grid

When people are using the electricity generated by the system, there is less load on the national grid which means that those without solar panels can also be provided with the electricity.

The energy shortage can be reduced when the excess energy is transferred to the grid as it can be used by other consumers as well. This will lead to continuous flow of electricity to more people and thus more people can benefit from it. This is the communal effect of installing a solar panel system.

Premier Energy is the best solar company in Pakistan that provides turnkey on-grid solar solutions to the customers belonging to residential, commercial, industrial and agricultural sector. We have a 14% share in the total net metered Watts in Pakistan that shows our superior quality, premium services and complete solutions for your electricity problems. Premier Energy deals only in top-tier brands so you get the best products at the most affordable rates as our aim is to illuminate lives through renewable energy. Reach out to us in case of any queries or information required. We will be happy to assist you in your endeavor to go solar for a better future.